In the world of electric vehicles, the Corbin name is associated with many Firsts.

1972: Mike Corbin built and piloted the first electric motorcycle to set a record over 100mph on the Bonneville Salt Flats.

1973: The Corbin-Gentry XLP-1 is the first electric motorcycle registered for public roads.

1974: Professor Charles MacArthur piloted a Corbin electric motorcycle to the top of Mt Washington in New Hampshire becoming the first electric vehicle of any sort to do so. 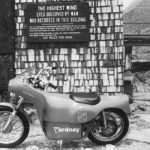 1974: Mike Corbin created the first electric race motorcycle to use a battery technology other than simple Lead-Acid. Quicksilver takes to the salt with Yardney Silver-Zinc batteries.

1974: Quicksilver bumps the electric motorcycle land speed record to 165.397 miles per hour… A record that stands untouched for over 30 years.

1975: Corbin electric street motorcycle makes TWO non-stop trips to the summit of Mt Washington! 8 miles to the summit on an average grade of 12% through 99 hairpin turns.

You get the idea.

Clearly setting a land speed record so robust that it stood for over three decades is an achievement of which Mike is very proud. Considering he has always been a strong proponent of electric powered vehicles, it makes it that much more near and dear. 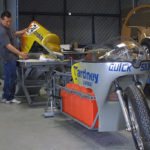 Quicksilver at the Corbin shop for a little polish

Now forty years later and Quicksilver was back in the Corbin shop. No, we didn’t have any plans to fill her up with Li-ion batteries and challenge Elon Musk to a dragrace… we were just giving the ole girl a thorough polishing and getting her ready for another day in the sun.

For this outing Quicksilver was to be one of many featured elements at the Quail Motorcycle Gathering that took place in Pebble Beach May 17, 2014. The annual event was a celebration of the Evolution of Motorcycles and 100 Years of Bonneville Speed Trials. Needless to say we were extremely proud to be a part of it.